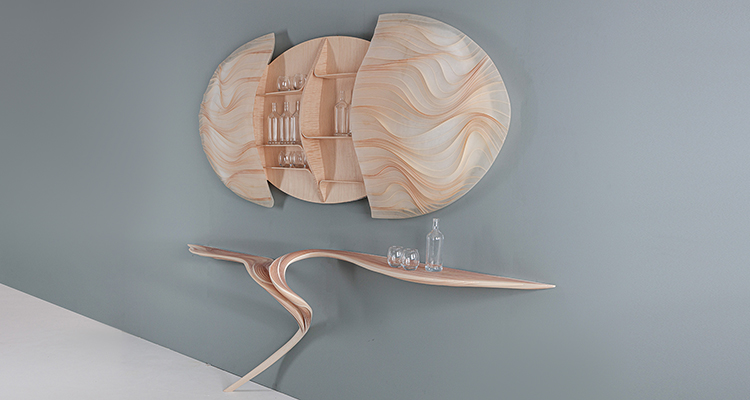 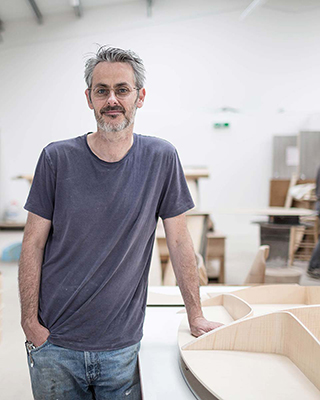 Can you describe your working process?

We’ve been concentrating on laminated veneers for ten years; we don’t do anything else. There’s no solid woodwork here. We’re using .6 mil veneers; the logs are put in boiling water and steamed, sliced with a knife, so there’s no wastage. When we get them, they’re already precut. And they come sequentially, every veneer in order, exactly as they would be in the tree. When you put them back together again, it looks like the wood has grown into a shape, rather than us forcing our will on it. But, though we probably know as much as anyone in the world about laminating veneers, that’s actually not all that much. There’s so much more to know. There isn’t anyone out there to teach us, but I want to always be learning.

Can you say what those new directions would be?

There comes a point in every artist’s career when they want to change direction. Having done twisted forms for 8 or 9 years, the big change for us was the Ethereal range, where we are putting in the veneers vertically, and pouring the resin into the gaps between the veneers. People don’t really understand what they’re looking at, until you sit down and explain it to them. It’s like a third material – not just two materials together, but an entirely new material, because of its characteristics, like the color gradient in the resin between the spaced veneers. The early samples of this technique were terrible, we shelved them, and only came back to it after a few years. We played with it for a long time before we frosted the resin – and then we thought, this is exciting. This is the direction I’d like to go in now: see-through, delicate. Achieved through new techniques, and different materials again. The path is not straight.

Let’s go back to the beginning of the story. What was your early work like?

My early work looks just like Ron Arad, though I had no idea who Ron Arad was. My background is in car restoration – Volkswagens and Porsches – so I was doing metal fabrication. Then I got into metal sculpture, then seating. But the market for metal furniture dropped suddenly in the late 1990s. We had three shops carrying it, and they all went bankrupt in three months. So I thought, I’ll just learn woodwork. I got involved in traditional cabinetmaking and I stuck with that for a couple of years. The clients were coming and I was winning awards, but it wasn’t what I wanted to do. I like when there is a tension or energy in the work, but it’s not trying too hard, not throwing everything at it. That’s the hard part, getting the interesting form, the energy, the fluidity.

When you start a project, how do you prototype or model it?

The imagery is never computer driven. The computer will always give you a correct curve, and that’s not what you’re looking for – it’s forced. We do use 3D printed models for presentations  to clients. I never use digital renderings, because for the client that is so like a photo, so they think you have already made it for them. But 3d printing is very useful. It is ambiguous enough that we can still make decisions later, as we’re making the piece. Often we start from an idea, maybe not even a sketch. Just grabbing a veneer and seeing which way it bends, then a pack of veneers, clamping it in space, seeing what kinds of twist we can get out of it. You’re very much led by the material; you have to be guided by the way the wood wants to bend.

The One Piece series seems in retrospect like a real breakthrough in this regard.

The irony of course is that it’s not one piece, it’s fifty or sixty, glued up to look like one piece. It was quite early on in us doing bent forms, so we wanted to see how far we could push it – sometimes almost to the point of failure. You couldn’t get more twist in it, or it wouldn’t glue together. And that becomes quite exciting, quite intuitive, it guides you in how it wants to be shaped. The use of negative space is also important in that series. It’s not just about making something big, bold and beautiful, it’s also about how it interacts with what’s left behind. I wanted to create silhouettes that clients could explore over time, that wouldn’t tell you the whole story right away. I think clients respond, also, to the earthiness of the brushed wood in contrast with the harshness of the metal.

How do you execute the metalwork on those pieces? Is it a casting process?

No, it’s not cast. It’s a resin with a bronze powder suspended in it. We have been using that for 10 or 12 years, and we were quite early adopters of that technique. It looks like real metal – of course it is, 97%, suspended in a small amount of resin. If it’s applied and polished correctly, you end up with something that gives you the same resonance and shine as solid bronze. But you can get it over a tight shape.

It’s another example of the magic trick of the work – it is one thing and appears to be another.

That runs right through what we do. When we deliver the piece, I want the client to say, “I’ve not seen anything like that,” but also, “I don’t quite get it.” I remember exhibiting the Nautilus table in London, and one lady thought just for a split second that I had managed to find a shell that big, and put a piece of glass on it and sell it as a table. Even John Makepeace, when he saw it, told me, “I have no idea how you made that.” And he was one of my idols, along with Wendell Castle. I love their pioneering go get ‘em attitude, getting wood to do different things.

What about earlier furniture history? I imagine people mention Art Nouveau to you often.

You can’t look forward if you don’t look back. Early in my career I saw a French film, in which there was a wonderful Art Nouveau desk. I did some research and found out it was by Louis Majorelle, from his Aux Orchidées series, and that it was in the Musee d’Orsay. So I got on the Eurostar and went to Paris. And I was just blown away by the adventurousness of this piece. Its shapes are not what we expect woodwork to be like. It’s more like sugar craft. You look at Art Nouveau and you want to eat it. You’d be sick, but you want to eat it! Art Nouveau fell out of fashion for lots of reasons. But I’d love to think if it had carried on, this is where we’d be now. If there is an “Art Nouveau Nouveau,” then maybe we’re doing it. It’s a lifetime of trying to get to the perfect curve.

The work may not look easy exactly, but it has a certain grace. As if you had made it happen through some alchemical process.

If it looks easy, I can tell you it certainly isn’t. The shapes may look like they’re grown naturally, but they are very considered. I always say to my students – if you are going to learn one thing from the year with us, it’s to be “considered”. You don’t need another word. If you’ve got a truly considered thought, everything in the piece will be right.